A Different Type of Concrete

Roller compacted concrete, or RCC, takes its name from the construction method used to build it. It’s placed with conventional or high density asphalt paving equipment, and then compacted with rollers. RCC has the same basic ingredients as conventional concrete: cement, water and aggregates such as gravel or crushed stone. But unlike conventional concrete, it’s a drier mix that is stiff enough to support rollers for the compaction process. Typically, RCC is constructed without joints. It does not require forms or finishing, nor does it contain dowels or steel reinforcing. These characteristics make RCC simple, fast and economical.

These qualities have taken RCC from specialized applications to mainstream pavement. Today, RCC is used for any type of industrial or heavy duty pavement. The reason is simple. RCC has the strength and performance of conventional concrete with the economy and simplicity of asphalt. Coupled with long service life and minimal maintenance, RCC’s low initial cost adds up to economy and value.

No Rutting, No Potholes

The high strength of RCC pavements eliminates common and costly problems traditionally associated with asphalt pavements. RCC pavements resist rutting, span soft localized subgrades and will not deform under heavy concentrated loads. RCC does not deteriorate from spills of fuels or hydraulic fluids and will not soften under high temperatures.

RCC owes much of its economy to high volume, high speed construction methods. Normally, RCC is blended in continuous mixing pug mills at or near the construction site. These high output pug mills have the mixing efficiency needed to disperse the relatively small amount of water used. Smaller projects can utilize conventional concrete plants and mixer trucks. Dump trucks transport the RCC and discharge it into an asphalt paver, which places the material. Compaction is the important stage of construction: it provides density, strength, smoothness and surface texture. Compaction begins immediately after placement and continues until the pavement meets the density requirements. Curing ensures a strong and durable pavement. As with any type of concrete, curing makes moisture available for hydration; the chemical reaction that causes concrete to harden and gain strength. A spray on wax membrane is typically used to seal the moisture inside. When appearance is important, joints can be saw cut into the RCC to control crack location. If economy outweighs appearance, the RCC is allowed to crack naturally. An asphalt surface is sometimes applied for greater smoothness or as a riding surface for high speed traffic.

For RCC, economy was the mother of invention. The need for a low cost, high volume material for industrial pavements led to its development. Low cost continues to draw engineers, owners, and construction managers to RCC. But today’s RCC owes much of its appeal to performance: the strength to withstand heavy loads, the durability to withstand freeze- thaw damage and the versatility to take on a wide variety pf parking applications. From container ports to parking lots, RCC is the right choice for tough duty.

For additional information or an estimate on your pavement project, call the paving professionals at FloridaRCC 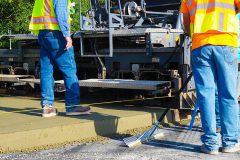 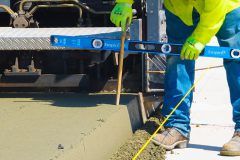 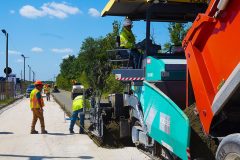